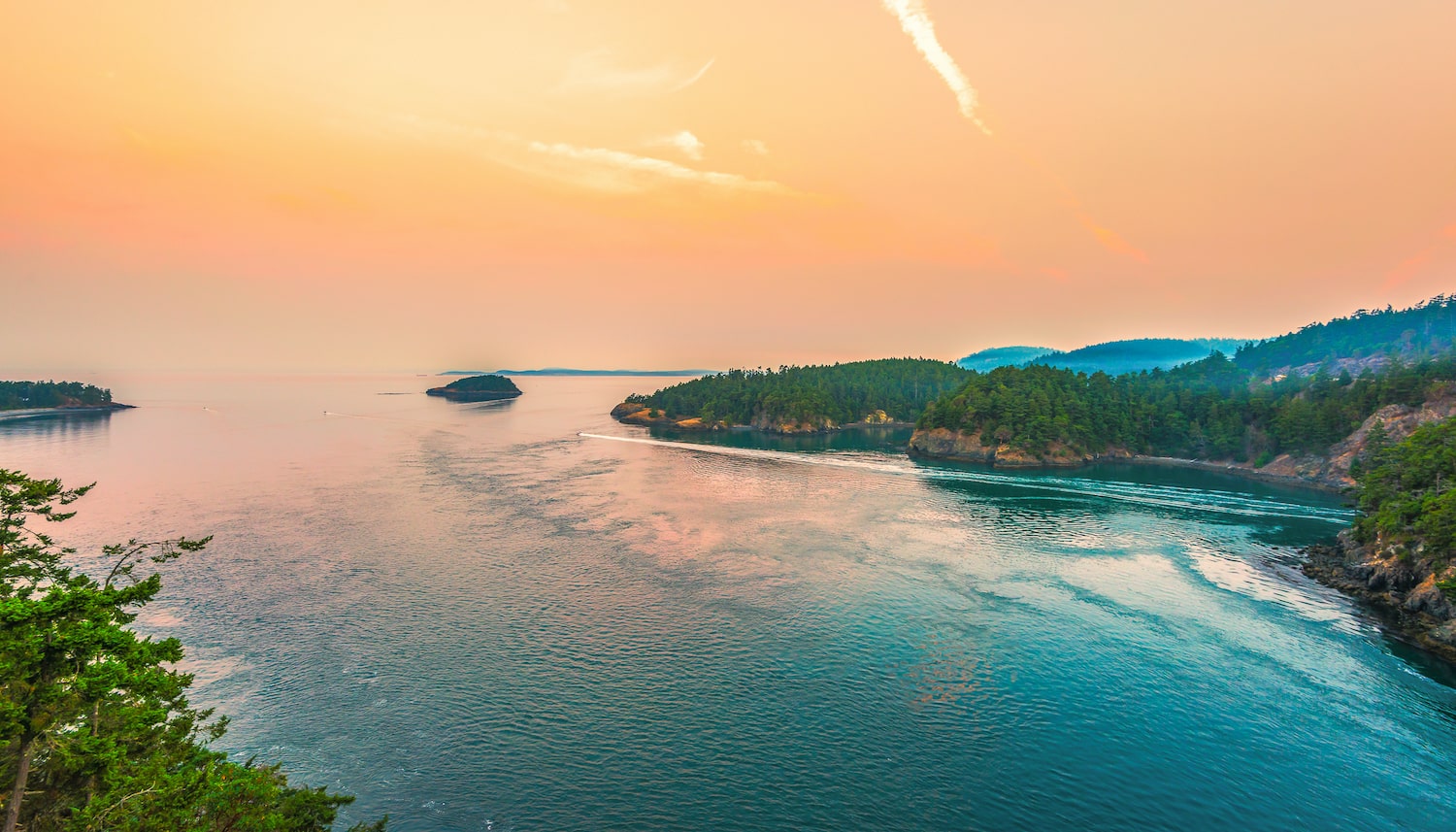 With its varied terrain, spectacular scenery and multitude of recreational opportunities, it’s no surprise that Deception Pass State Park is one of the most frequently-visited parks in Washington.

Located among the islands that dot the coast near the U.S.-Canadian border, the park actually stretches across two islands—Whidbey and Fidalgo—with the halves connected by a bridge between them. With so many exciting things to see and do, virtually every Deception Pass State Park outing ends with visitors already planning their next trip. Though it was first mapped by the Vancouver Expedition in 1792, the area surrounding Deception Pass was home to multiple Coast Salish tribes for centuries prior to its discovery by British explorers. After Washington achieved statehood in 1889, the current park site was part of an area managed by the U.S. military.

At the end of the first World War, the government announced a plan to sell the land for private development and was met with impassioned public protests. Several years of negotiation resulted in the transfer of the 1,800-acre property to the State of Washington in 1922 for the purpose of establishing a state park “dedicated to the uses and pleasures of the people forever.”

Despite the preservation of the land for recreational purposes, no state funding, facilities or staff existed at the time to create and manage the park. The National Park Service stepped in, and along with significant assistance from President Franklin D. Roosevelt’s Civilian Conservation Corps (CCC), began work on construction of trails, benches and other infrastructure to make the park accessible to as many people as possible.

During the early years, the only way to get from the park lands on Whidbey Island to those on Fidalgo Island was via boat, typically on the small ferry that ran inconsistently between Yokeko Point and Hoypus Point. Finally, the state legislature passed a bill funding construction of a bridge between the two islands in 1934. Within a year, the steel structure was in place, carrying roughly 700 cars per day from one side of the park to the other. Today, around 20,000 cars travel the two bridges between Whidbey and Fidalgo islands on a daily basis.

Nearly a century after its founding, the park continues to expand, with the most recent addition being Kukutali Preserve on Kiket Island. The site is owned and managed in a partnership between Washington State Parks and the Swinomish Indian Tribal Community, and it features a vast preserve dense with old-growth forest and native plant species.

Getting to Deception Pass State Park Deception Pass State Park primarily occupies the northern end of Whidbey Island and the southern section of Fidalgo Island. The bridge between allows both cars, pedestrians and cyclists to cross the narrow strait dubbed “Deception Pass” by Captain Edward Vancouver during his expedition to the region in the late 18th century.

Visitors coming from Seattle have two options for accessing the park:

The 3,800-acre Deception Pass State Park offers visitors abundant opportunities to explore, with 77,000 feet of saltwater shoreline and 33,900 feet of freshwater shoreline on three lakes. Open year-round, the park’s hours of operation are 6:30 a.m. to sunset during the summer months and 8 a.m. to sunset in winter. Visitors will need either an annual ($30) or single-day ($10) Discover Pass to enter the park; both are available online and at automated kiosks at the park.

If you wish to explore the lakes and coastal waterways of the park during your visit, you will also need to purchase a $7 boat permit at one of the stations located inside the park; frequent visitors may opt for an annual Natural Investment Permit for $80. Deception Pass offers five saltwater and two freshwater boat launches, as well as 710 feet of saltwater dock and 450 feet of freshwater dock. Motors are prohibited on Pass Lake, and only electric motors are permitted on Cranberry Lake.

Fishing and shellfish harvesting require additional fees and licenses and are only permitted during designated seasons; more information is available via the Washington Department of Fish and Wildlife.

Things to Do at Deception Pass State Park Whether you’re interested in hiking, birdwatching, boating, photography or simply taking in the splendor of nature, Deception Pass State Park has something for everyone. With three lakes and dozens of miles of coastline, Deception Pass State Park offers a variety of opportunities for fun on the water. Deception Pass State Park is home to a wide variety of bird and animal species. Along the shoreline, you may encounter seals and sea lions sunning themselves on the rocky beaches or bobbing in the waves.

Near the wooded trails, you might see foxes and coyotes as well as deer and raccoons. Birdwatchers should bring their binoculars for a chance to spot eagles, hawks, owls and herons as well as other types of fowl. Organized tours are also available, including summer whale-watching tours and marine mammal tours in Deception Pass and Minor Island.

As you stroll along the rugged shore of the Puget Sound, you’ll see tidepools filled with abundant marine life, gnarled limbs of ancient driftwood and a variety of shells to collect as souvenirs of your visit. Deception Pass State Park features three main campgrounds with more than 300 campsites appropriate for both tents and RVs. Be sure to reserve your spot well ahead of time, especially if you plan to visit during the busy summer months. All three campgrounds include restroom facilities with flush toilets and showers.

Additionally, the Cornet Bay Retreat Center is available for group rentals and accommodates up to 200 people in 16 sleeping cabins with bunks. The center offers a fully-equipped kitchen, meeting lodge, sports court, amphitheater and fire circle and central lawn.

The building was originally a bathhouse built by the CCC in the 1930s and was transformed into its current use as a museum in 1987 thanks to the work of Washington State Parks staff and even a few former members of the CCC. Exhibits include photos, artifacts and video from CCC crews across Washington and the country. The Sand Dunes Interpretive Trail is short enough for little legs to handle, with level terrain that winds through various habitats, including sand dunes and stands of large trees covered in lichen. The trail through Deception Pass State Park features multiple opportunities for kids to spot wildlife, including eagles and the occasional whale, and signage throughout the trail provides information about the different ecosystems that call the park home.

The San Juan Islands and Olympic Mountains are also visible along the well-maintained path. At the end of the trail, kids can build sand castles on the beach and play on the playground.

Located at Rosario Beach, the Maiden of Deception Pass State Park story pole depicts the native Samish legend of Ko-Kwal-Alwoot. Parents can read the tale to children before visiting the totem, where they can search and identify various elements of the story carved into the ancient wood.

During the summer months, the Deception Pass State Park Junior Ranger program offers special events and learning opportunities several times a week at the park’s amphitheater. Junior Rangers learn about the region’s history, park safety and the importance of respecting and protecting the natural world, completing various activities to their Junior Ranger badge. Whether you’re looking for snacks, supplies or a guided adventure, the vendors of Deception Pass State Park have you covered.

The Lake Store: Located off Cranberry Lake Road between the Lower Loop and Forest Loop campgrounds, this general store sells camping gear, apparel, firewood, ice and a variety of beverages, snacks and ice cream. All proceeds from store sales go to the Deception Pass Park Foundation, which supports education, programming and conservation at the park.

Campstuff Coffee: Get your java fix next door to the Lake Store at Camp Stuff Coffee, which offers espresso-based drinks, brewed coffee and Italian sodas during the summer season.

Sisters Snack Company: This recent arrival to the park sells kettle corn from a small stand at West Beach. Not surprisingly, summer is the best time of year to visit Deception Pass State Park, with mild temperatures and minimal precipitation. July and August typically see about five rainy days per month, with average daytime highs in the mid- to upper 70s and lows in the mid-50s.